How will Brexit affect your domain portfolio? 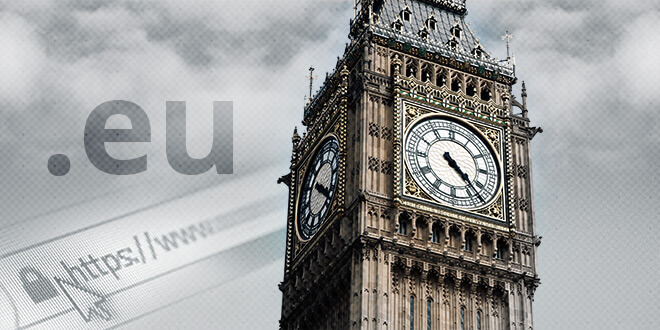 Due to the UK’s decision to leave the European Union, the European Commission (EC) stated that all .eu domain owners who are not Union citizens would become ineligible.

The registry for .eu domains, EURid, will be in power to cancel the holders’ rights and to deny any further registrations or renewals of this TLD. In Regulation (EU) 2019/517 published on March 29, 2019 the European Parliament maintained the eligibility criteria for registering a .eu domain name. A key point is a timeframe for these changes to come into force on October 19, 2019.
Following the latest political upheaval concerning the UK’s departure from the European Union, an update was released by EURid on March 22, 2019. The registry informed that any plans regarding domain names registered with individuals and companies located in the United Kingdom and Gibraltar had been placed on hold. However, the only scheme for handling .eu domains that has been published so far presents a rather dismal outlook for all .eu registrants who are not Union citizens.

A dead-end for .EU domains

A Notice to Stakeholders issued by the Commission on March 28, 2018 informed all UK-based registrants of .eu domain names that they will become ‘third country’ residents upon the UK’s departure from the European Union. As a consequence, the laws of Regulation (EC) No 733/2002 shall apply, which state that:

According to the statistics for the last quarter of 2018 published by EURid, just over 304,000 .eu domain names have been registered in the UK which makes roughly 12% of the total. Rejecting UK stakeholders might have a double-edged effect. On the one hand, businesses operating with .eu domains would record a massive blow due to their websites’ shut-down; on the other, the registry would suffer a financial loss. The number of .eu domain names registered by UK entities dropped by 76 399 in the past year. It seems though that EURid is not planning to make any exceptions and the grandfathering rule should not apply either.

After the third vote of no confidence for the UK’s Prime Minister Theresa May on March 26 and her possible dismissal, the Brexit date was moved to October 31. With three Brexit agreements already rejected, it seems that the UK might leave the EU with no deal. Following the EC statement, EURid has published a Brexit notice which explains two possible situations to take place after the UK exits the European Union:
In case no divorce deal is negotiated:

If, however, the UK manages to settle on certain withdrawal conditions but the agreement does not discuss .eu domain names:

What does Brexit mean for other TLDs?

Most of other TLD domain name owners can rest assured – European country code domains will not be affected by Brexit. Geographic domain extensions connected with the British Isles such as .cymru, .scot, .irish and .wales will remain available to users from the European Union after the UK’s departure. Also, the majority of European ccTLDs will stay open for registrants from the UK once it is not a member state anymore, with two exceptions:

The respective registries, AFNIC and NIC IT, have decided to take no action upon their registration rules until more is known about Brexit conditions.
Another two ccTLDs, .hu and .sk, restrict potential domain name owners to citizens of European Economic Area or the European Free Trade Association. So far, no announcements have been issued concerning these two confederations and the UK’s membership. Continuing its presence in EEA and EFTA is currently being negotiated by the United Kingdom.
If you think your domain portfolio can be affected by Brexit, EBRAND can perform a complimentary domain audit and advise you on the best way you can secure your domain portfolio.